Tomb of Osiris at Giza 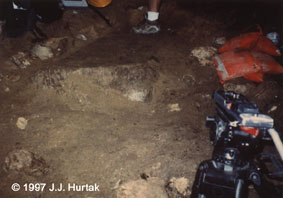 The Nike tennis shoe (resting on the cover) shows the first evidence of the lid of the Osiris tomb, discovered in 1997. 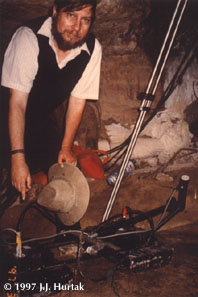 Dr. Hurtak with GPR (Ground Penetrating Radar) kneeling in the area of standing next to the tomb Osiris with his finger pointing to the sarcophagus lid

Thirty-three plus meters (about 100 feet) under the Giza plateau we discovered the sarcophagus lid indicating the existence of the Osiris tomb in the central watery mote. This was two years before the FOX TV special on the opening of the tomb in 1999.

We believe from radar studies both within the chamber and in the surrounding area that there is much to be discovered under the sands of the Giza Plateau.